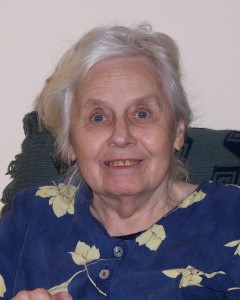 Mary Loewen was born on August 22, 1922, near Steinbach, Manitoba, the eldest of ten children. Mary was raised in a Mennonite home. She remembered her mother teaching her to pray, and seeing her father read his Bible. However, the church was considered responsible for all religious teaching. She took baptism classes and was baptized as a teenager, but even then no one explained to her how to be saved. When she clearly understood God’s Word, she embraced it wholeheartedly. Because of that ambiguity in her youth, Mary had a real desire to explain the gospel clearly to as many people as she could.

She married Aaron Friesen on May 23, 1943, and five daughters were born to them. They farmed in rural Manitoba, increasing their involvement in home missions until they joined the Shantymen’s Christian Association full time in 1966. They operated Hilbre Bible Camp for First Nations children, where Mary was in charge of serving meals to up to a hundred people weekly. They moved to B.C. in 1973, leading a small church in Lone Butte before retiring to Nelson in 1978.

Mary prayed faithfully for hundreds of friends, acquaintances, family members, and missionaries for decades, phoning many of them on their birthdays. She touched many lives and her prayers will be greatly missed. She and Aaron gave generously of finances and family so that the good news of Jesus might be shared around the world. Mary continued sacrificial giving after Aaron’s death.

Her independent living ended after a stroke in April 2007 and she moved into full time care. On November 5, 2010, Mary passed away peacefully at Jubilee Manor in Nelson, with family members at her side.

Mary was predeceased by her parents, two brothers, and her husband, Aaron (1998). She is survived by her five daughters and their husbands, eleven grandchildren and their spouses, and sixteen greatgrandchildren. 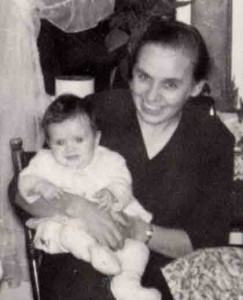 That’s the official version of the story that was my mother’s life. I am the youngest of those five daughters. This is a photo of my mom holding me when I was a baby. I think SweetPea looks a bit like I did!

Because I was the youngest by a six-year margin, I got more alone time with my mom than my older sisters did during my growing up years. My mom loved to do puzzles (both jigsaw and crosswords) and play games. Some of her favorite games were crokinole, aggravation, tri-ominoes, and rummicube. In fact, one of my sisters played rummicube with Mom last April…and Mom won. 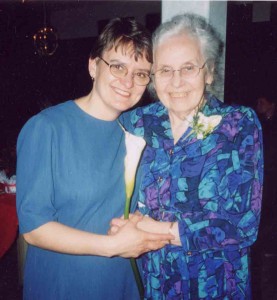 I think one of the things my kids will remember about their grandmother is how much she loved to bake. She was always good for cookies, cakes, squares, bread, as well as fabulous soups and other cooking. She kept a toy drawer, and some of those toys now live at my house for when SweetPea is a bit older. And she played games with her grandkids as well–anyone who would play with her!

My parents took a lot of road trips around North America up until my dad’s hip replacement surgery in 1984. After that, even local trips were infrequent, and after my dad’s death, Mom didn’t leave town much, even when folks offered her rides. (She’d stopped driving by the late 70s.) This photo of her and I was taken at my daughter’s wedding in ’03, which I think was the last time she traveled (90 miles or so). 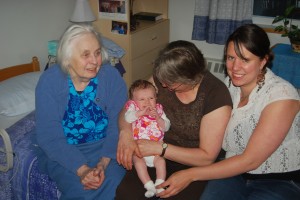 This 4-generation photo was taken on Mother’s Day 2010, when SweetPea was about 10 weeks old. I’m glad my mom got to meet her youngest greatgrandchild on several occasions, even though her memory was clouding over by that time. She was honored to have SweetPea named after her. And I felt honored that the little white sweater my mom made for Hanna when she was a baby was worn by SweetPea to the memorial service last Monday.

Life goes on. I know my mom is in heaven, happy to be rid of the body that had failed her in increasing measure the last few years. I will miss her–not the woman she’d become, but the mother she once was.

Enjoy heaven, Mom. Jesus earned it for you.

“As an Amazon Associate I earn from qualifying purchases.” Valerie Comer is a participant in the Amazon Services LLC Associates Program, an affiliate advertising program designed to provide a means for sites to earn advertising fees by advertising and linking to amazon.com.

Affiliate links kick a small fee back to Valerie, but do not cost you anything extra. Thanks for clicking!
Full Disclosure